Our dear Audre Myers really is the gift that keeps on giving.  After her excellent (and very well-received) post about the Idaho Bigfoot, she sent me a clip of audio of the Bigfoot’s “call.”

My intense love of music, coupled with my growing interest in Bigfoot and cryptozoology, prompted me to ask Audre to consider writing a piece “about the haunting song of the Bigfoot.”

Audre made some noises about doing her best, and I sat back, knowing—like the bloated editor I am—that she would pull through with another excellent post.  I was right.

With that, here is Audre with “By Special Request”:

END_OF_DOCUMENT_TOKEN_TO_BE_REPLACED

The title of this week’s piece is a bit of a misnomer:  it’s not from an open mic night, but from a morning church service.  There’s also no singing—at least, not from me!  I’m just tickling the ivories.  *Tickle, tickle!*

The piece here is one of my favorite Christmas carols, “Hark! The Herald Angels Sing.”  We did sing it for morning service this past Sunday, 27 November 2022 at my little country church, but I was warming up and having a bit of cheeky fun beforehand.

END_OF_DOCUMENT_TOKEN_TO_BE_REPLACED

It’s Cyber Monday here in the United States, yet another day to hawk my wares to my unwitting—uh, I mean “loyal”—readers.

Here’s the big one:  the Kindle edition of my book, The One-Minute Mysteries of Inspector Gerard: The Ultimate Flatfoot, is on sale for just $0.99 through midnight (EST) this Thursday, 2 December 2022!

And the paperback version is the perfect gift!  Why give someone a boring, predictable gift, when you can give them a collection of unsolvable, absurdist noir detective stories to read around the yule log?  Enjoy egg nog-enriched guffaws as your friends read mystifying tales of hyper-sleuthing.

Give the Gift of Weird this Christmas—like crudely painted primitivist artwork!

While you’re at it, why not head over to my SubscribeStar page and subscribe for $1/month to unlock all of my SubscribeStar Saturday posts.  For $5/month, you get fresh doodles every Sunday, as well as other random bonuses.

Well, you get the idea.  Support yours portly on this feast of savings!

END_OF_DOCUMENT_TOKEN_TO_BE_REPLACED

Gobble, gobble, dear readers!  Thanksgiving Week is coming to an end, but we can still look back at the food and fun of the expired week.  Here’s one last, longing, wistful look back at the unlimited freedom of this glorious week:

Here’s hoping those food comas are wearing off and you’re ready to get back to the grind.

It seems as though I post about “the s-word”—secession—about once a year (2019, 2020, 2021), and always on Saturdays (two of those posts are behind paywalls for a reason; it’s amazing how charging a buck for something on the Internet is the best way to ensure no one ever sees it).

The recent, abysmal midterm elections got me thinking about the topic again, but what really got the juices flowing was this map my brother forwarded to me: 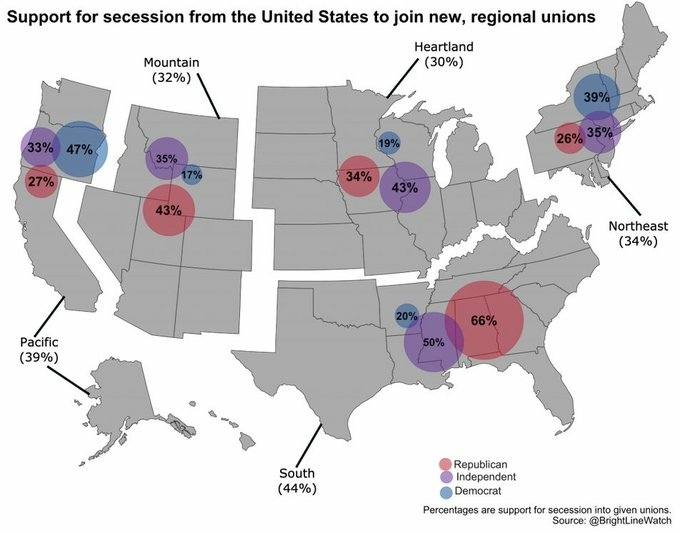 The map comes from this post at Bright Line Watch, an organization that—so far as I can tell—gauges how the health of “our democracy,” to use the parlance the Left loves so well (it’s pedantic to point out, but we’re a constitutionally-limited federal representative republic with democratic mechanisms—at least, we used to be—not a democracy).  Like most such outfits, I suspect they are institutionally Leftist, but in this case, I don’t think ideology infects their numbers.

Note that 66% of Republicans in the South support secession into a new regional union, spanning from Texas to Virginia (I’d say let’s stop at the border between South and North Carolina, but that’s just me), as do 50% of Independents.  Only 20% of Democrats do, but that makes sense—they’d probably not much like being in a Southern Union dominated by conservatives.

I do think it’s a tad far-fetched to think that 66% of Southern Republicans pine for secession.  Most Republicans I know are still flag-waving Boomer types who worship Abraham Lincoln (what I was until just a few years ago).

Still, (allegedly) 44% of Southerners supporting the idea of breaking out into a thirteen-State union (the old Confederate States of America, plus Oklahoma and Kentucky) is ridiculously high.  It only takes a dedicated minority of 20% to shape policy and push change at a societal level (thus the concepts of the “Silent Majority” versus the “Noisy Minority”), so 44% is more than double that threshold.

Does it mean anything?  Is America headed for The Civil War II?

Disclaimer: I do not want or advocate for a violent revolution; I am merely exploring an issue of growing interest in our fractured political times.  The restoration of true federalism is the preferable answer, but barring that, a peaceful separation of the States could—not necessarily is—another possible outcome that prevents widespread violence and continued tyranny at the national level.

To read the rest of this post, subscribe to my SubscribeStar page for $1 a month or more.

It’s another Black Friday here in the United States, the day when retailers are finally in the red after convincing everyone to storm the commercial Bastille and buy flat-screen televisions at rock-bottom prices.  It’s intriguing to consider that our entire retail sector hinges on the successful execution of one day of sales to shore up an entire year of losses and (I will recklessly assume) corporate mismanagement.

I vastly prefer teaching music lessons, which put me into the black pretty much from the beginning of the year and throughout.  Of course, there are lots of other ways you can help me stay in the black, such as…

Seriously, my whole marketing tactic this Christmas season is “Give the Gift of Weird.”  Why give someone another scented candle they’ll shove into a drawer and forget about?  You can totally win your White Elephant gift exchange with a self-published book of unsolvable, absurdist detective stories.  Or help an oddball relative celebrate with a painting of a demonic-looking beast sword.

Release yourself from the shackles of predictable gifts that no one wants or needs!  Don’t risk setting fire to your house with some crappy candle.  Instead, be fire on Christmas morning with some wacky, one-of-a-kind gifts from yours portly.

You’ll also be giving those schmucks at Target a break, which they desperately need after sacrificing Thanksgiving to fulfill your insatiable lust for plastic knick-knacks.

With that, here is “Flashback Friday^2: Brack Friday Bunduru: Workers Need a Break“:

END_OF_DOCUMENT_TOKEN_TO_BE_REPLACED

I’m thankful this year, too, although I am similarly in a bit a slump personally.  No matter—I’ve got a good family, a good house, a good dog, and lots of private lessons to tide over my insatiable lust for frozen pizza and LEGO sets.

My pastor has been working painstakingly through Philippians for some time now, and has been hammering home the idea of finding joy amid our situations, no matter how difficult they might be.  If the Apostle Paul could rejoice in a Roman prison, we can rejoice in the far less trying times of our daily lives.

Good stuff, even if it’s hard to live out.  At least today I’ll get to eat some turkey.

END_OF_DOCUMENT_TOKEN_TO_BE_REPLACED

Audre Myers is perhaps my most Anglophilic contributor, probably even more Anglophilic than Ponty, and he’s actually from England!

As such, it was only a matter of time before she graced us with a delightful, tea-and-crumpety BBC dramady about rediscovering lost love in old age.

There’s something befuddlingly adorable and quintessentially English about two stodgy geezers falling in love.  Perhaps it’s the notion that we can always recapture some sliver of our misspent youths when in the throes of being in love.  Nothing quite so takes us back to the possibilities (and follies) of youth quite like tumbling head-over-heels for someone else, especially when they tumble into you, willingly and excitedly.

Two fogies canoodling also gives us some hope that it’s not too late for us after all—gulp!

With that, here is Audre’s review of Last Tango in Halifax:

END_OF_DOCUMENT_TOKEN_TO_BE_REPLACED

We all knew this announcement was coming, but making it official seals the deal and ends any lingering speculation.

Here’s another announcement of far less significance or magnitude, but one of importance to yours portly:  The Portly Politico officially and formally endorses President Donald J. Trump in the Republican primaries and for President of the United States.