What’s better than a spooky game about evading monstrous grotesqueries?  A sequel to that game.

A review of that sequel is better still, and that is what good ol’ Ponty offers up today.

As I noted last Friday, I’ve owned Little Nightmares on Steam for some time now, but I haven’t fired it up yet.  I doubt I will have had an opportunity to do so in the last week, but I’m hoping to dip into it (and some other games) soon enough.  Ponty’s reviews have me itching to try both installments of this macabre little gem—and possibly to revive my dead-in-the-water Morrowednesdays segments.

There’s not much else to say, despite my increasingly legendary ability to write introductions.  I’ll let Ponty take it from here; so with that, here is Ponty’s review of Little Nightmares 2:

So guys and gals? How did you get on with Little Nightmares? Was it dark and creepy enough for you? Did the puzzles tax you enough? How did you get on with evading the various inhabitants of The Maw? The real question is did this game exceed my review of it? Or your own expectations? Did it surprise you, shock you? And was your reaction to The Granny similar to my own – a spine tingling shudder? If you haven’t yet played it, you can answer those questions another time. All I will say is that the second installment takes everything great about the first and adds to it. The puzzles and strategy aspects are similar, though there are some changes, and it is, if anything, more terrifying than its predecessor so without further ado, let me take you through the dark and strange world of Little Nightmares 2.

Though Six plays a starring role in the game, your playable character this time out is a little boy known only as Mono. As with the first game, we are treated to a very short introduction, of a metal door at the end of a long stone corridor, dark and out of focus, before we’re shunted out of a TV screen and Mono begins his journey.

He finds himself in the countryside, on the edge of a forest. There’s a soft mist, it’s dark and the leaves are falling slowly to the ground. As you get your bearings and learn (or relearn) your controls, familiar sights will come into view – hanging sacks with the arms and legs of dead children sticking out; cages either suspended from trees or on the ground. Maybe the odd trap to negotiate. It sets the tone for everything that follows. 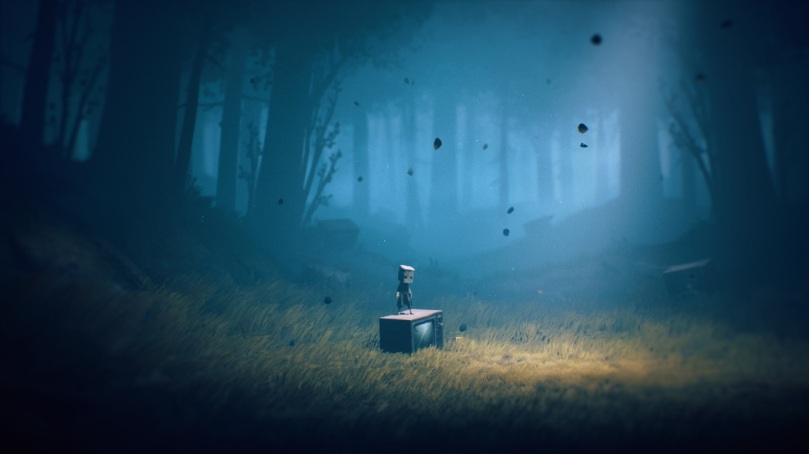 There are 5 chapters this time around, though each are longer than those in the first game and each come with their own danger; the hunter, the teacher, the doctor, the mannequins, and the thin man. There’s also another much harder and just as terrifying threat, but I’ll leave that one as a surprise. However, if you don’t mind the odd spoiler – though I’d wait until you’ve played the game – you should maybe check out some of the reaction videos to the various threats online. This one is the introduction of Thin Man. I don’t mind admitting that my heart fluttered when this happened:

Trust me, this won’t detract from your experience of the Thin Man segment in the game. I’ve played it a few times and this part still scares me. In fact, the latter parts of this section scare me more.

Visually, it is stunning. The dark, bleak exteriors, the tall buildings leaning into each other, more importantly, over Mono and Six, are impressive as they are dominating, reminding our characters how small and insignificant they are. As in the first game, those distance shots of the characters as they either clamber up stairs or through the streets remind one of Ico (an older game for the PS2, also worth checking out) though much darker.

Tobias Lilja’s soundtrack mirrors the bleak landscapes flawlessly, accentuating the sheer beauty of the backdrops while heightening the fear of the chase. As with everything else, Lilja assembled a broad range of music, each piece perfectly aligning the various environments and situations that Mono and Six find themselves in.

The controls are much the same but there are slight differences, certainly in what you can do in this game. For one, evasion is no longer the be all and end all. Eventually, you might find yourself cornered and you’ll need to fight your way out. The weapons Mono uses are basic: axes, hammers, bludgeoning instruments. The problem is they’re too big for Mono so he has to drag them and each swing is heavy so your timing has to be immaculate, otherwise you’ll get pounced on and have to start the segment again. This should give you an idea of what I mean:

As you’re also playing with another character, you can ask for help. It won’t always be given but at certain times, like getting a boost to a higher ledge/platform or needing a helping hand for a long jump over a chasm, you can call Six and she’ll aid you. You can hold her hand at various moments, too. For the most part, unnecessary, but say, when you’re hiding in an undergrowth, it can be useful to remain close.

There’s also the key situation. In the first game, when you pick up a key, it can be cumbersome; you have to hold and carry the key, while sneaking or running until you can get it in the lock. This time around, Mono will deposit the key in his pocket which makes movement a damn sight easier.

Evading, hiding, and running from your foes is just as hard, if not harder than negotiating around your enemies in the first game, and as for strategising, well, once you’ve worked out what you want to do in a particular moment, you still have to do it and some of the puzzles can be frustrating.

Talking about your enemies, their characteristics and physiology are very different and you will be asked to find varying ways of dealing with them while seeking your exit. I won’t expand too much on what each of these characters do – I don’t want to spoil it for you – but what I will say is they fit the mould of everything you might expect from a fantasy nightmare. Grotesque, bewildering, frightening and unyielding; all of them will give Mono and Six a torrid time. 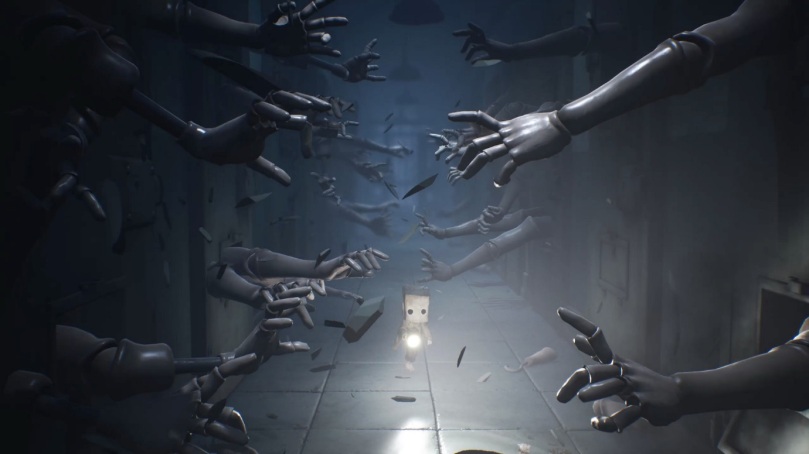 As with the first game, there are collectibles – hats – which are very hard to find. At any point, you can switch your finds for the paper bag Mono wears on his head from the beginning of the game though I never bother.

In this game, you’ll need to keep your wits about you. It will try your patience at times but for the most part, it’ll test your courage. To reiterate what I stated in the review for the first game, Little Nightmares 2 is best played in the dark, to fully immerse you into that environment. It’ll be tricky to complete – all the best games are – but you will feel a sense of achievement when you’ve done so. Tarsier/Bandai Namco really make you work for it. As for the ending, well, it still shocks me.

I’d give the first game 10/10; that’s how much I rate it, but the second goes above and beyond and gets an 11 out of ten from me. I love everything about it. There’s nothing I’d change and all of the right elements – the controls, the story, the interaction, music, characters, elements of fear and wonder, the striking imagery – are there. Little Nightmares 2 is gaming perfection.

Platforms: Same as those for the first with the addition of PS5.

NB: Here are the soundtracks for LN1 and 2.