As I noted Saturday, I was in Indianapolis, Indiana this weekend for my older brother’s wedding.  The last time I’d been to Indianapolis was twenty years ago, for a Church of God (Cleveland, Tennessee) Teen Talent competition.

This trip I did not get to see much of the city, as I arrived late in the afternoon Friday and flew back Sunday, and everything in between involved wedding events (and, of course, the wedding itself).

I’m notoriously bad about taking pictures, so I don’t have many of my own to share.  But the wedding was at Laurel Hall, which I’ve been describing to people as “a Gilded Age castle.”  It’s not properly a castle, but it’s certainly a mansion, and was constructed in 1916 as the residence of a wealthy family.  It served many functions, including as a children’s hospital, and a fraternity owns it now.

All that said, it was a very good trip, even if I had to fly to get there.

The flights themselves were—thankfully—uneventful.  I flew out of Charlotte, North Carolina directly to Indianapolis, perhaps the first time in my life I’ve enjoyed a direct flight to anywhere.  That took much of the stress out of flying, which I often find to be tedious.

I did note a difference between the TSA agents at the Charlotte airport and those at the Indianapolis airport:  the ones in Charlotte were much nicer.  Granted, they seemed to have fewer of us meat puppets to shuffle through their various checkpoints than the Indianapolis airport, so maybe they still view us as human beings.  The Indy TSA agents were pretty tight-lipped, other than one very nice lady agent who was all smiles after we made it through the full body scanner.  They weren’t mean, per se; they just lacked in that effortless affability and hospitality for which we Southerners are so well known.

On the flight back, by comparison, the stewardesses were very perfunctory and business-like—again, not mean, just not very friendly.  We received miserly drinks portions, and they hawked us on an American Airlines credit card at the end of the flight.  Granted, that latter part came from corporate, and I’m sure they hate having to read ad copy during the flight.  Regardless, I was happy for the drink and the pretzels.

But what about Indianapolis itself?  My brother and his wife (note:  they were legally wed back in September, and this weekend was the big splashy “for fun” wedding) live in a very cool brownstone-style walkup smack in the historic district of downtown Indiana.  Their house includes three stories and a finished basement, and it shares a wall with their neighbors.  It’s a massive house, and while I wouldn’t like schlepping two flights of stairs to the master bedroom, the verticality of the historic home is impressive.  The neighborhood looks like a tightly-packed suburb, but it’s smack in the middle of downtown Indianapolis and every house is distinct (and most of them are beautiful).

The wedding itself was sheer swank, which doesn’t surprise me too much given my sister-in-law’s lavishly bourgeois tastes.  There was the obligatory cocktail hour (translation:  camp next to the kitchen door so you can pounce upon the waiters when they finally bring another tray of food, then try to kill time until the real meal is served), followed by a delicious dinner.  The highlight of that meal was the stuffed salmon, which had some kind of amazing breading on top of it.

Needless to say, I went into the weekend a porker, and have come out even portlier than before.  I’m trying to live up to the title of this blog, naturally.

My one job on the day of the wedding was to bring my brother’s dog, Joanie, to the venue, as well as his wife’s miniature Dachshund, Charles.  Charles had a little tuxedo, and Joanie wore a collar with pearls.  The dogs weren’t allowed in the manor, and the photographers were running behind, so we stayed warm in my brother’s old-school Honda CR-V.  It was snowing the day of the wedding, but not sticking.  Still, it was bitterly cold, and I was glad when we could get the dog’s photographed.  I had to run them back to my brother’s place, then rush back to arrive in time for the ceremony.

Earlier in the day, my sister-in-law’s father picked up Jimmy John’s for the ladies who spent entirely too long gussying up at the venue.  I’ll never understand why the girls have to arrive so early the day of the wedding.  Even with all the elaborate makeup and coiffure, I always hear the same thing:  “I’ve been here since [insanely early in the morning] and have basically been sitting around for six hours.”  Is there a way to streamline the process?  Is it a feminine power move—the bride knows she has her harpies captive to her capricious whims, and can therefore inconvenience them maximally?  Ladies, please weigh in on the inefficiency of the bridal party wedding day experience.

Anyway, there was one sandwich left.  I snuck it into my coat pocket and kept it there for the duration of the (short) ceremony, but had fun pulling it out beforehand to show my younger brother and my cousins, who got a kick out of the idea that I’d be sneaking bites of a submarine sandwich during a wedding (to be clear, I did not, but it was tempting).

Sandwich-related shenanigans aside, it was a good wedding.  My niece and nephews danced until they dropped, and we all enjoyed a massive brunch Sunday before going our separate ways (as if we needed more food—ha!).

And now I’m back here in Lamar, plowing through life as usual.  I’m looking forward, though, to a return to Indianapolis, and letting my brother feed me delicious, high-end foods.

P.S.—Murphy stayed in Fort Mill, South Carolina with a friend, who also graciously took me to and picked me up from the airport in Charlotte.  Murphy was also living the high-life:  treats, sofas, and a fenced in backyard full of squirrels and wild rabbits to chase.  She also had three canine pals to loaf around with, and she only tried eating one of them once (in a dispute over a frozen piece of broccoli). 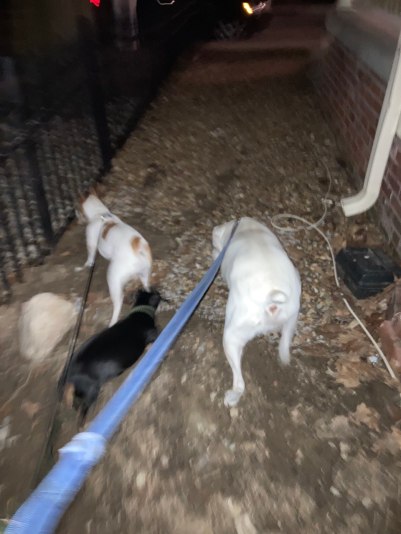