As last Tuesday’s post suggests, I’ve really been getting into small forms of art:  miniatures.  Short musical pieces are fun to compose, and can be dashed off (and, hopefully, recorded) in mere minutes.

I’ve also always been a lover of bric-a-brac—little tiny figurines and collectibles and the like—and am drawn to them in part because of their tiny size.  I have a random assortment of such bric-a-brac on my desk at this very moment—an R2-D2 figurine; a little pumpkin finger puppet; a LEGO Han Solo; a little ghost—and have other little figurines in various places in my home.

Back when I was getting ready for the most recent Halloween Spooktacular, I particularly enjoyed painting mugs, which I sold/attempted to sell at the concert.  I had plenty of acrylic paint leftover from the Spring Jam (where children painted birdhouses), and for Christmas I received some little 5″x7″ canvases.

Amusingly enough, I discovered these canvases when looking for Christmas presents for my three-year old (as of today!) nephew.  I was looking at his Amazon wishlist (his mom put it together, not him), and found the canvases… so I added them to my wishlist.  That means I have the same tastes as a toddler.

Regardless, I cracked open the canvases and set about with my first stumbling attempts at painting.  The first I painted was a pastoral scene, which I entitled “Apple Picking” (also featured in this past Sunday’s Sunday Doodles):

In talking to Mariella Hunt on Instagram (yep, I have an Instagram now—d’oh!), she mentioned how much she enjoys pink apples, so I dabbed in some pink spots as a small nod to her.

After letting the paint dry a bit, I added some additional details—the blood splatter from Cupid’s arrow piercing through the heart-head; gray on the arrow; and additional detail on the cowl: 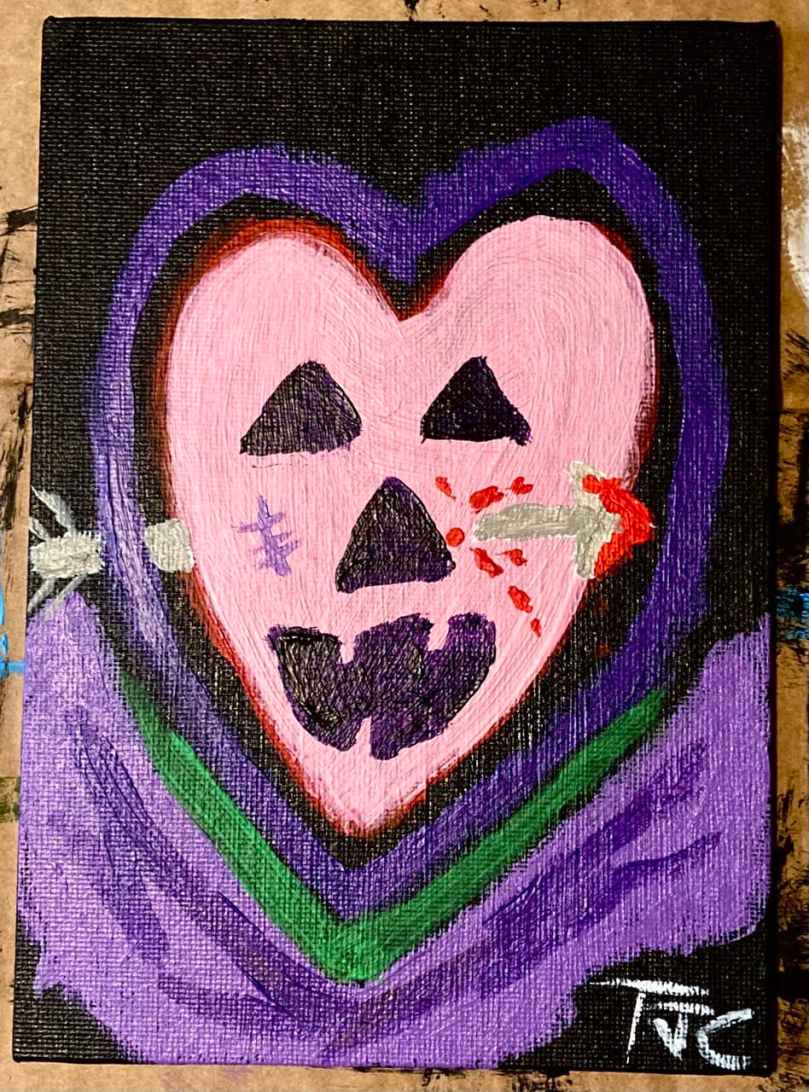 I’ve had two proposed names for this painting: “Frankentine” and “Valenween.”  “Frankentine” has a great ring to it, but the figure in this picture doesn’t seem Frankensteinian enough.  I also thought “Valoween” would be a good variation on “Valenween.”

What do you think?  Leave a comment.  Oh, and if you were to purchase artwork, what would you pay for one of these (if anything!)?  Let me know!