This weekend I embarked on the ultimate in childlike self-indulgence and built the largest, most detailed LEGO set I’ve ever encountered:  The Medieval Blacksmith (#21325) set.  This bad boy is part of the LEGO Ideas series, which allows LEGO fans to submit ideas for sets.  If the set gets 10,000 votes, LEGO reviews the build and, if they like it, they turn it into an official LEGO set.

These are premiere sets, and are often quite expensive.  I managed to pick it up on sale at Target and had a gift card, so against my better judgment, I treated myself to Medieval Blacksmith for the princely sum of roughly $145.

Readers must understand:  that kind of splurge is very out of character for me.  But sometimes a deal is too good to pass up, and I’ve been drooling over this set ever since it was announced some months ago on LEGO’s website.

I’d say I got my money’s worth with this one.  Around 2 PM Saturday I set to work on the behemoth, taking breaks of varying lengths for meals and to walk Murphy.  I stopped building around 12:15 AM Sunday morning, just before the first bits of icy sleet began to fall from the winter storm (which I dubbed “Winter Storm Randy”).  I resumed building Sunday morning around 10 AM and wrapped up before noon.

In total, I’d say I spent a solid eight hours of actual construction time (that includes probably half-an-hour looking for a single missing piece on my hands and knees, which at the time of writing I still have not found).  Normally I’d never have the time for such an endeavor, especially in one stretch, but with a gloriously open weekend and the Korean series Squid Game, I set about building the blacksmith’s shop and home—all 2164 pieces of it. 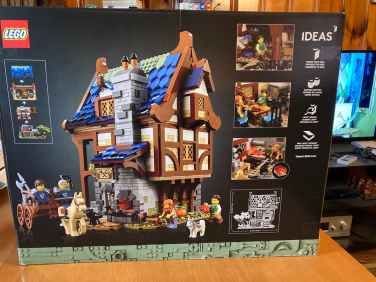 The Back of the Box 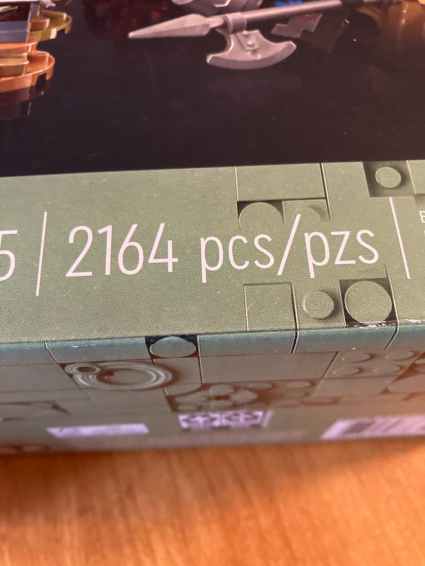 Other than probing for a missing piece on my hands and knees, this set was really fun to build—and very challenging.  A critique of LEGOs is that, while a build might take time to complete, it’s not that hard, as the instructions are clear and you just follow them.  While that’s generally true, I found with this set I frequently had to backtrack to steps because I’d miss one tiny detail.

The instruction booklet that accompanied the set was massive—and very well done.  It was super glossy and thick, but I think to avoid even higher printing costs, LEGO would have single pages that would call for placing a dozen or more bricks.  That made it very easy to miss small details, of which there are a lot on this set.

Overall, though, the set made for some deeply satisfying building.  Like reading a good book, there were times when I completely lost track of the time, and would realize that I’d be working for an hour or more straight.  If it weren’t for my gluttonous appetite—and Murphy’s—I’d have probably gone hours without breaking focus.

The building consists of three floors.  The first consists of the blacksmith’s shop, complete with anvils, metal rods, swords, and a furnace that lights up.  It also includes the grounds of the shop, which feature a well, a small garden, and an apple tree.  The apple tree was probably the most annoying part of the set, and as I finished building the entire house, I accidentally snapped the three in two, so I had to go back to figure out how to put it back together again. 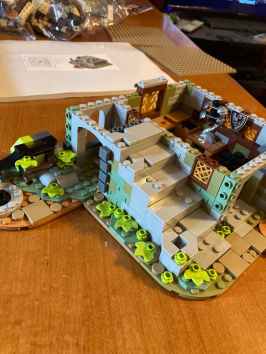 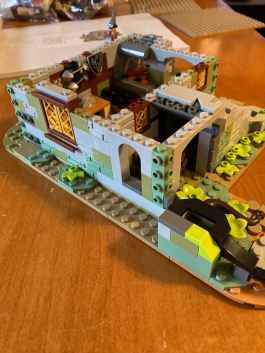 First Floor from the Side 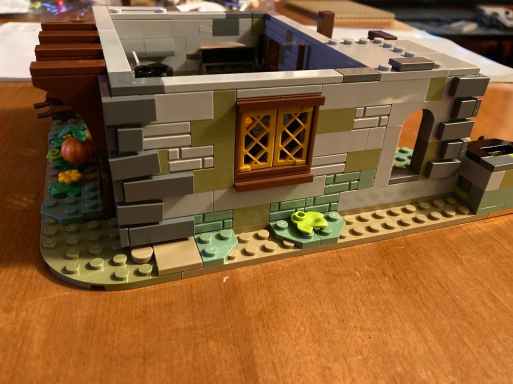 A Less Interesting Side! 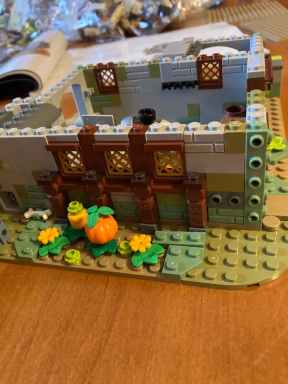 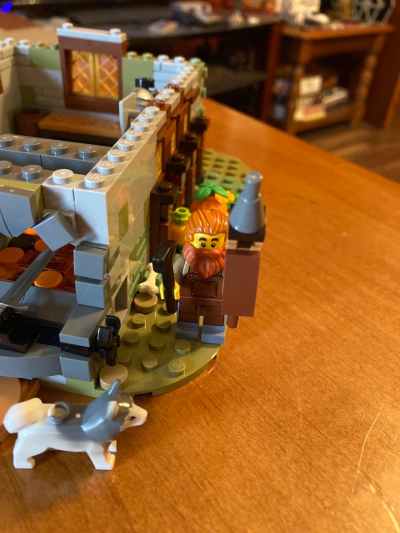 The Blacksmith Hard at Work (with his dog)

The Interior of the Blacksmith’s Shop

The Beginnings of a Very Annoying Tree 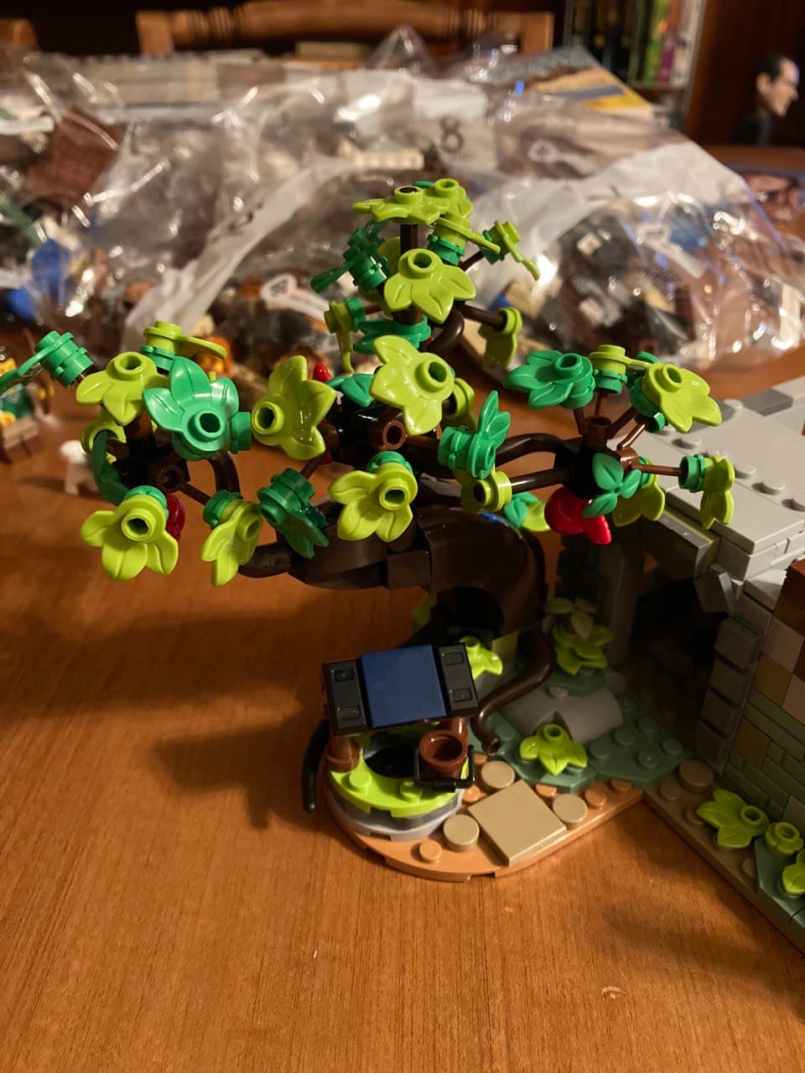 Here is a video clip of the anvil lighting up.  There’s even a little set of bellows! 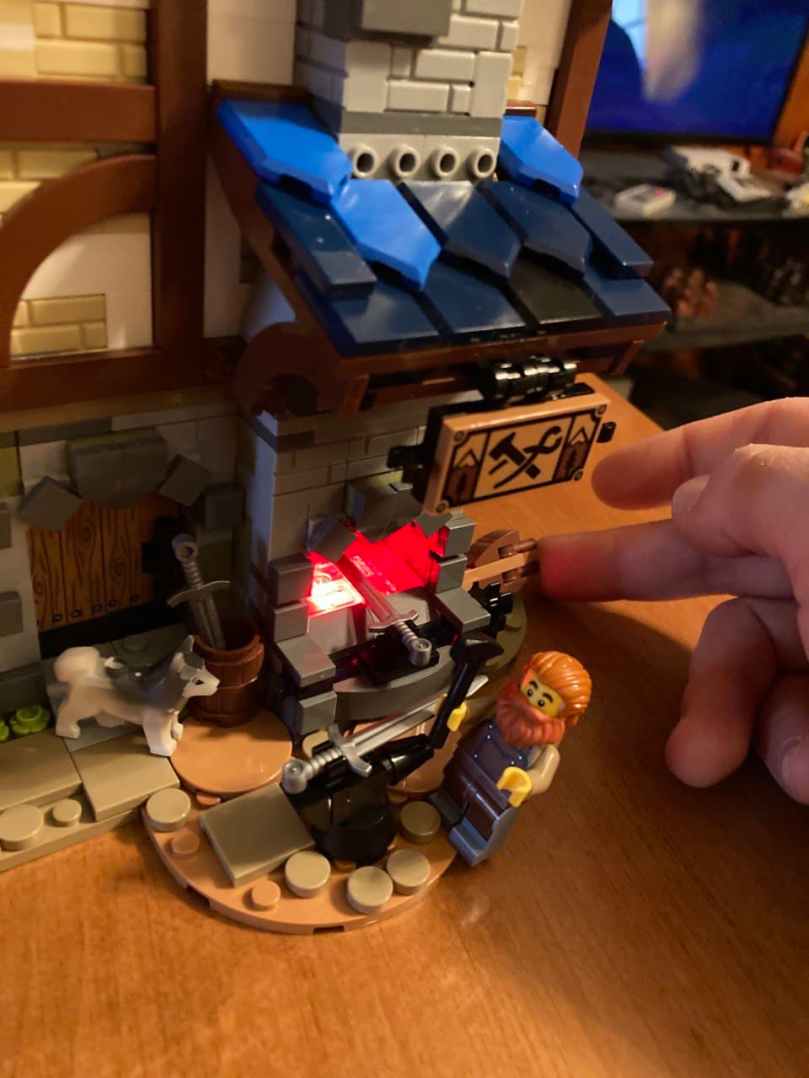 The first floor definitely required the most time to complete, as it was very detailed.  The other floors were detailed, too, but seemed to go a bit quicker.

The second story is really fun:  it’s the kitchen!  There’s a kitchen table and a couple of ornate chairs, as well as a little keg (presumably, of mead) tucked under the stairwell.  My favorite detail is a wood-burning stove with little wooden logs.  The wattle-and-daub style on the outside of the second floor is particularly charming. 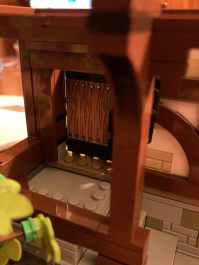 Door to the Second Floor 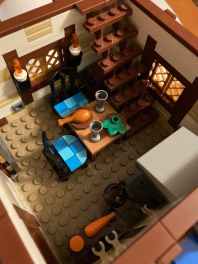 The Kitchen and Dining Area 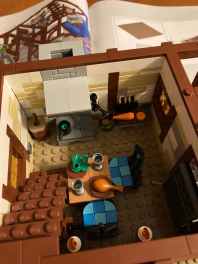 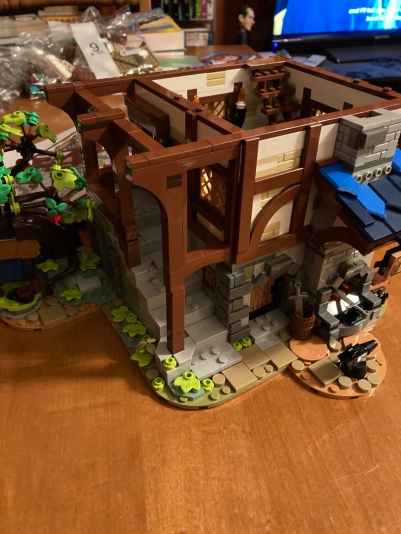 Second Floor from the Exterior

Garden View of the Second Floor

The third floor is a smaller attic (due to the slanted, shingled roofs).  The best part is a little writer’s nook, and a very nice bed.  The quilt on the bed was one of those detailed elements that took some time to get right, but I found it to be more satisfying than some of the garden elements (or putting the stones on the side of the house).  I love the rustic look of the shingles, and how they aren’t a uniform color—clearly, the blacksmith has been replacing (or not replacing) them as he is able.  There are even missing shingles on one side of the roof!

Here is where I ran into some trouble:  I was wearing a sweater with loose-fitting sleeves, and knocked a bunch of pieces on the floor.  This resulted in spending a solid thirty minutes looking for pieces—little, dark brown pieces on my dark brown floor.

I never managed to find the piece, but I was very fortunate that it was not essential to keep the build going.  I’m sure it will turn up at some point, but I managed to “patch” the missing piece—which was part of a support beam on the edge of the roof.  It turns out I forgot to use a four-by-one brown smooth-topped piece on one part of the building’s exterior—see, it’s easy to miss steps!—but that mistake worked out, as it allowed me to get the roof looking correct. 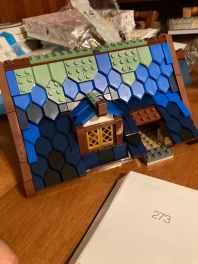 The Window is In! 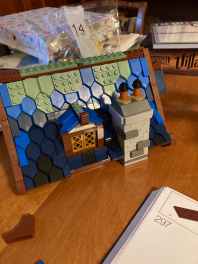 …and now the chimney!

The Blacksmith in His Bed (which is on the Third Floor)

The Third Floor Roof from the Opposite Side 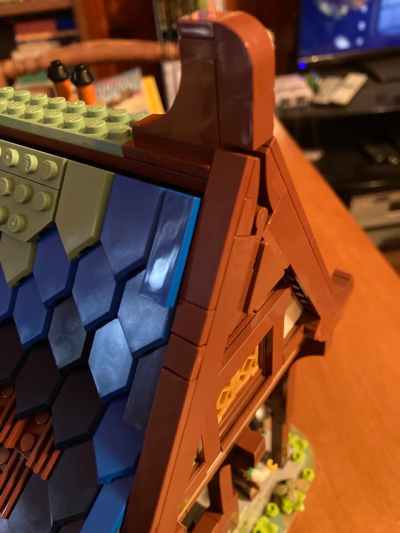 My “Patch Job” to Fix the Missing Piece

With that, the build was done!  The last bag of LEGO pieces (the fourteenth one!) including parts to build a horse-drawn wagon, as well as the old male knight and the young female knight.  There’s also a young girl archer to hang out with the blacksmith and his dog.

The Blacksmith’s House with Minifigures 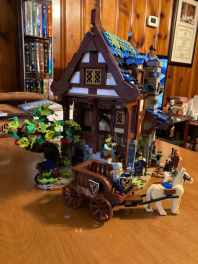 The Friends from Another Angle 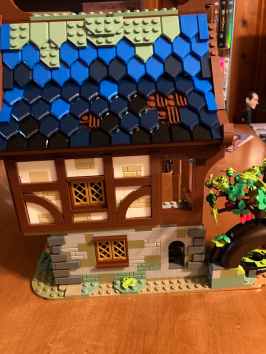 Back of the House 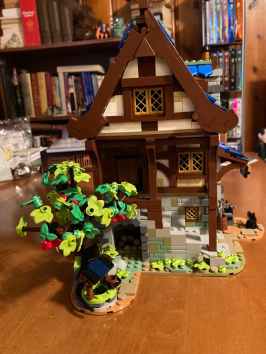 After finishing, I had a bunch of random, small pieces leftover—the extras that always come with a LEGO set.  With these I build extra accents—some more plants, for example—and I even put some weeds growing out of one of the missing shingles on the roof!

Like a book you don’t want to end, I was a little melancholy to finish this set.  That said, it gave me an incredible sense of accomplishment, and it’s a wonderful display piece.  I’ve even begun putting some of the random mini-figures from other sets in the house.  I think a racecar driver is sleeping in the bed, and a Christmas sweater-bedecked Darth Vader is having a lightsaber duel on the roof with the girl protagonist from the sequel trilogy.

Are you a kid at heart?  What cool LEGO sets have you built?

7 thoughts on “Getting Medieval… with LEGO”