Yesterday I wrote about SimRefinery, the oil refinery software lost to time (I’m praying it’s sitting on a long-forgotten floppy disk somewhere).  What I didn’t tell you was that I had succumbed to a mild but annoying stomach virus, so I was essentially useless for the rest of the day.

Of course, what better way to spend one’s time when sick than with video games?  After writing about SimEarth and doing some nostalgic reading about the world-building simulator, I tracked down a playable DOS version.  A helpful commenter also linked to the game’s 200-plus-page manual, which is necessary for accessing the game.  Anyone familiar with 1990s-era computer technology will recall that, in order to prevent piracy, games would often ask users to look up some piece of information buried in the manual, the theory being that if you owned the game legally, you’d have the manual.

During this sickly walk down memory lane, I realized how much I had forgotten about SimEarth.  The game is more complicated than I remember.  It’s not that deep, but what makes it difficult is balancing all the different inputs to your planet—the amount of sunlight, how much of that sunlight is reflected by the clouds and the surface, how much cloud cover to have, how quickly animals mutate and reproduce, how frequently meteors strike the surface, etc., etc.

It seemed that, as a kid, I knew pretty much what I was doing—if I wanted to turn the planet into an icebox or a veritable Tatooine, I could do so without too much difficulty.  But I also knew how to create a thriving, biodiverse planet that could nurture intelligent life.

Not this time.  My planet, Bootanius VIII, really struggled to develop life more complex than radiates (jellyfish and the like) and some simple bacteria.  This screenshot is about as biodiverse as my planet got: 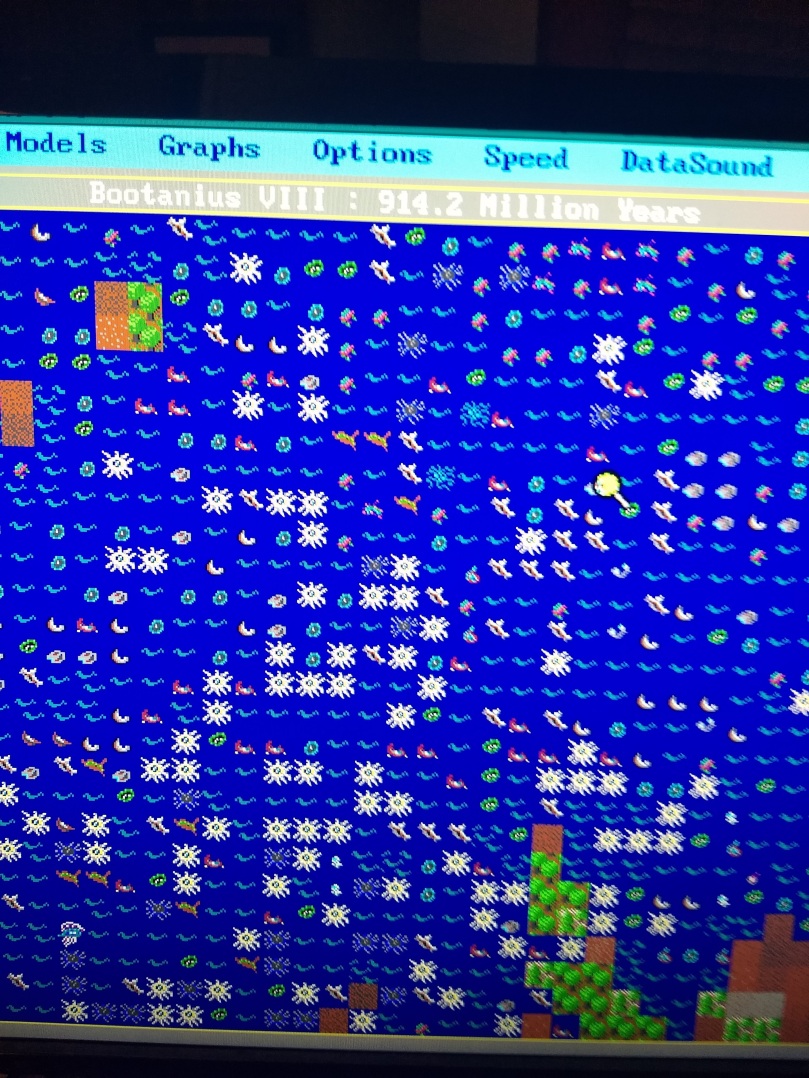 After tiring of waiting for more complex life-forms to develop organically, I plopped some insects down in a forest.  That quickly resulted in the development of carniferns, one of the fun “Easter Egg” animal families in SimEarth.  Essentially, carniferns are Venus Fly Traps, and SimEarth makes it possible for them to gain sentience and start a civilization.  So I used the Monolith option—essentially extraterrestrial interference—to grant the humble carniferns intelligence.

Eventually—and I’m talking after hours of leaving the simulation to run itself while I worked on finalizing grades—the Stone Age carniferns moved through the Bronze and Iron Ages, finally achieving industrialization, then the Atomic Age.  All was going well until their supply of atomic energy began to run low, at which point a massive atomic war engulfed the planet in nuclear winter!

I cut off access to atomic energy and the war ended, with radiation lingering for millennia.  Growing tired of my warlike Fly Traps, I used the monolith again to hasten them along to the next phase:  interstellar travel.  SimEarth has every city launch from the planet, thereby returning the planet to the animals, giving another species a chance to rise.

After that, I sincerely tried to relearn the terraforming mechanics to make a world that could sustain life.  But after my seas were overrun with single-celled bric-a-brac and my Stone Age dinosaurs collapsed, I decided to call it a night.  Clearly I’m not cut out to manage an entire planet.

A big part of the appeal of a game like SimEarth is the stories.  Want to create a desert world populated by lizard people?  It’s possible (I did it, years ago).  Want to design a world inhabited by civilization-building octopuses?  You can do that, too.  Indeed, you can just let the simulation run and see what happens—will oceans develop without your interference?  How quickly will bugs show up?  What happens if I change the planet’s axial tilt a bit?

I’m looking forward to starting fresh with another planet soon.  Maybe this time I’ll get the delicate balance right, and all manner of critters will o’er flow the surface of the globe.

Or it’ll be another nuclear winter.  D’oh!