We’re in the midst of primary season—the most wonderful time of the year, until you realize that one of these jokers could become president—so I thought I’d look back to the results from the 2019 elections.  That’s an off-year election, but there are some important lessons from then.

The post below, “Election Results 2019,” largely focused on the Lamar Town Council elections.  My strategy was to vote for the two challengers, because the town government really dropped the ball on doing routine DHEC water tests (although our mayor—bless her heart—has been trying to resolve the issue).  I also intuited that one of the challengers would likely be a Republican/conservative, for reasons too politically incorrect to write here.

The big takeaway from the 2019 election is that if you let Democrats gain a monopoly on power, they will abuse it immediately.  That’s been the story of Virginia, a once-deep-red State that has gone quite blue, due to the preponderance of progressive population poured into Northern Virginia.

The legislature wasted little time in promising to ban and confiscate guns en masse.  That act of totalitarian pique may very well turn the State red in November, as the Trumpian masses have been jolted from their slumber.

We shall see.  But the moral is clear:  don’t give progressives power.  And we have to assume that every Democrat is a progressive.  A conservative Democrat is a unicorn in 2020.  This message is for those squishy suburban moms and “decorum” obsessed NeverTrumpers who think they’ll enjoy political moderation under a Democratic regime.

Don’t make the same mistake twice.  Vote Republican/Trumpian/populist/nationalist/conservative/immigration patriotic this November.  Your country is counting on you!

Yesterday Lamar, South Carolina held elections for Town Council.  Since our local paper doesn’t seem to be putting the results online, I thought I would post them here.

I drove by Town Hall last night to check the results, but they were still working on finalizing the results when I drove by, and I lacked the will to drag myself out of the house again.  But I swung by this morning and photographed the official receipt from the machine, as well as the handwritten results (akin to a student council election), which were posted to the front door: 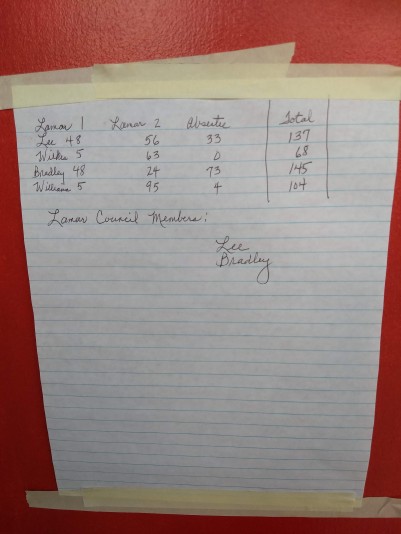 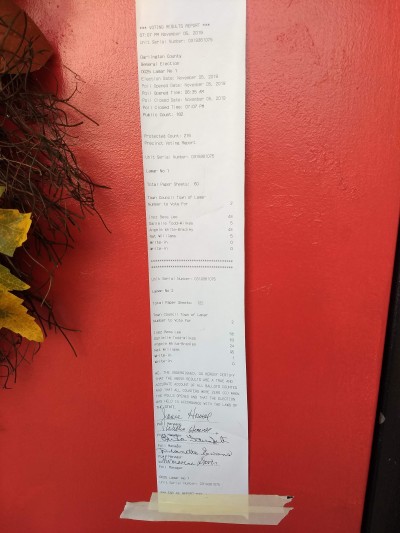 My strategy of voting for the challengers in a “Jacksonian spirit of rotation in office” failed, as the two incumbents sailed to reelection.  As such, Town Council is unchanged.

Nationally, Republicans dominated races in Mississippi and Kentucky, except for the Kentucky governor’s race, which the Democrats won in a squeaker.  They won in part due to the incumbent governor’s unpopularity, but also because of the Libertarian spoiler, who siphoned enough votes away from the Republican to cost conservatives the election by about 5000 votes.  Thanks a lot, Libertarians—you cost conservatism a gubernatorial election (which the Dems will hold up as proof that Trump is losing support) for… what?  Getting John Hick’s name in the papers?  We’re at war with progressives, and all you care about is smoking weed naked.

Unfortunately, Virginia has fallen completely to the Democrats.  That’s not too surprising, given the swamp creatures in northern Virginia, but it’s sad to see the ancient bastion of Southern liberty fall to big government apparatchiks.

That’s it for today—a quick public service post.  Hopefully the good folks of Lamar can get the results without having to drive downtown now.