When I was in college, I formed this ridiculous pseudo-band with a suitemate of mine (who has, apparently, now gone down some dark roads) called Blasphemy’s Belt, which my bio on another band’s website refers to as an “electro-pop humor duo.”  I can’t remember how we came up with the name—our music wasn’t particularly or purposefully blasphemous (or good), and while we wore belts, they weren’t outrageous (just to keep our pants up)—but it was apparently catchy enough that people picked up on it.

The Belt never performed live, other than for an annoyed roommate, and a highly grating pop-up concert (at least, that’s what hipsters would call it nowadays) on our floor’s study room, but we generated enough buzz to get people to vote for us in a “Best of Columbia” survey in The Free Times.  We didn’t win anything, but it was an object lesson in how enough hype can make people believe you have substance when you really don’t.

Tom Steyer is a former hedge fund manager and current environmentalist nutcase who, along with half of the population of the United States, is running for the Democratic presidential primary in 2020.  Unlike Blasphemy’s Belt, nobody knows who he is; I don’t even think he qualified for the debates. Unfortunately, he’s trying to rectify that by running incessant ads on Hulu.

I’ve seen enough attack ads from Democrats to tune them out—they’re just a more overt form of the dishonesty progressives usually engage in—but Steyer’s ad brings bile to my throat.  It’s not because of his ludicrous claims (that President Trump is a “fraud and a failure”), idiotic as they are.

It’s because of his stupid belt.

Tom Steyer has no chance in the Democratic primary because a.) he’s unknown; b.) he’s an old white guy and c.) he’s not the old white guy who was President Obama’s VP.  As such, he no name recognition or intersectionality points.  He’s not even a pretend Indian like Elizabeth Warren.  He wears a blue button-up shirt with rolled-up sleeves and jeans in his commercials—the default uniform of politicians trying to appeal to the working man—and is utterly forgettable.

Except for that belt!

Here is the one picture I could find of it online, and it’s just a picture of someone’s television showing the ad (care of a Kenyan newspaper): 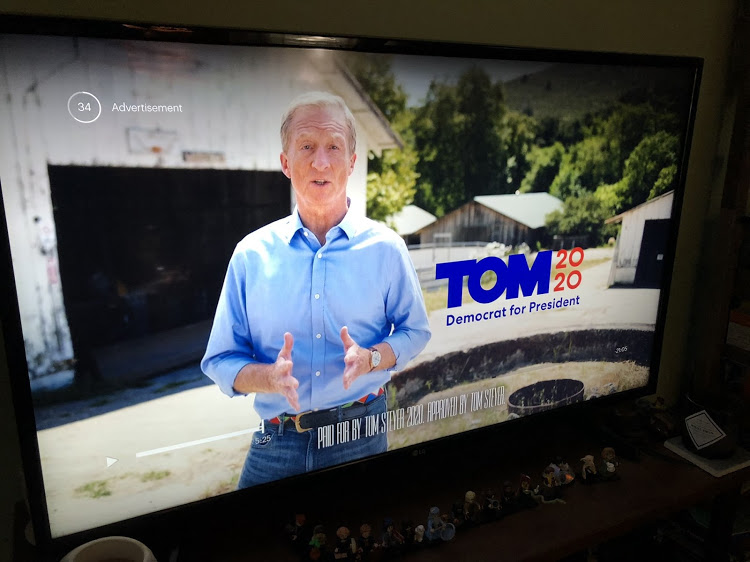 Here is an excerpt from the article (again, it’s from a Kenyan newspaper, so the written English is prone to syntactical errors):

The Presidential hopeful revealed while responding to a curious netizen who inquired the significance of the belt since he had worn it in one of his campaign videos.

Steyer noted that he bought the belt during his visit to Kenya.

“Thanks for noticing my favorite belt! I bought it on a trip to Kenya from female artisans,” he tweeted.

Additionally, he affirmed that the belt is a reminder that the world benefits when women are educated, as the belt was made by female artisans.

“I wear it as a reminder not to be so formal, and also as a symbol that the world is a better place when we educate women and girls,” he mentioned.

This kind of pandering makes my skin crawl.  Look, I have nothing against unusual belts.  But you look at a guy like Tom Steyer wearing this ridiculous belt in a campaign ad for president, and you know he’s trying to virtue-signal.  He said as much in the excerpt above—“I like the belt, but I also want to show how progressive I am by buying colorful belts from African women.”

His very sartorial choice is a political statement.  If you’re a punk rocker, yeah, you’re showing your disdain for order with your outrageous duds.  But you’re not likely to run for President of the United States (that would be too normie and conformist—being a part of the system, rather than trying to tear it all down).

Also, how much education does it take for a Kenyan woman to make a weird belt?  She probably learned how to do it from her mother, not from a progressive public school (there, she’d just learn to resent her skillfulness making belts as a form of patriarchal, white oppression—then no belts would get made at all).

Mostly, though, Steyer’s belt highlights his own clueless elitism.  Nobody cares about your belt you picked up at some street bazaar on a luxury safari in Kenya.

Clothes say a great deal about a man (or woman).  I feel better about myself when I’m dressed well (and it’s not 8000 degrees and 400% humidity outside).  I, too, have an unusual little ornament that I sometimes wear, that often draws attention—but it’s way more endearing than some empty gesture of my multicultural bona fides.

Years ago, I had a student who was obsessed with South Korean culture and music.  She especially loved a K-pop group called Exo—basically a Korean boy band.  Before a big concert, she asked if I’d wear an Exo tie if she bought me one; naturally, I said yes.

A couple of weeks later she came to be with a little felt bag.  She explained that Exo did not have ties, but they did have tie clips.  I pulled from the bag a little piece of silver-colored metal, with a button-sized picture of Korean teen heartthrobs.

I wear it frequently, as it’s functional (it holds my ties in place) and a conversation starter.  It’s always fun to tell, as I lead with, “Oh, it’s a Korean boy band” so I get weird stares, then I tell the story above, which is an endearing example of a close and respectful student-teacher relationship.

I’m not saying I’m immune from self-righteous outbursts, but I don’t politicize a sweet, unique gift from a student (it also doesn’t look like I’m wearing the clothing of another culture in order to make myself appear more diverse and progressive).  If I wore that tie clip in a political ad (a distinct possibility), no one would be able to tell that there are ten Korean boys on it (at least, I hope not!).  Tom Steyer knows people will see his colorful, clearly-exotic belt, and he’s banking on progressive voters saying, “Wow, this old white Wall Street hedge fund manager is really down with the struggle.”

Perhaps, like the great David Carradine, Steyer’s ham-fisted belt will be his undoing.  Then again, he was never really done up in the first place.