Yesterday, I wrote about the current child separation policy—and the issue of illegal immigration more broadly.  I initially thought about approaching the topic with delicacy and tact, scaffolding my argument with ample disclaimers about sympathy for the situation of the children, etc. (and, in a flippant way, I did).

But the whole delicate, walking-on-eggshells, tightrope-walk performance of disclaimers is wearying, and I decided to go off half-Coultered instead.  We live in an age in which voicing any controversial (usually conservative) opinion requires pages of tedious disclaimers along the lines of “while I agree that [controversial topic here] is bad, I would argue [very narrow, logically-consistent exception to the badness of the controversial topic].”

This practice gets old fast.  To be an open conservative these days means enduring more litmus tests and grilling than a Supreme Court nominee—and that’s just to be able to function socially in mainstream society. 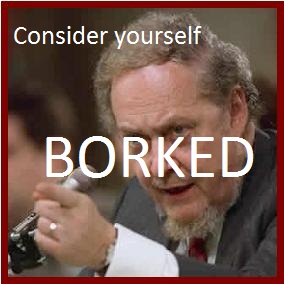 Robert Bork—one of my intellectual heroes

What does one get for one’s trouble?  Only a very few people take the time to appreciate subtlety of argument.  The Cultural Marxist, social justice warrior approach to any disagreement is to attack every position relentlessly on axiomatic grounds, rather than hearing out the opposing viewpoint in full and digesting it completely.

The effect is that to even make a controversial argument—no matter how balanced, well-researched, or logical—is to invite wholesale scorn and derision, up to and including expulsion from polite circles.  The true goal of this monolithic dismissal of anything outside of the fashionable-for-the-moment social justice “mainstream” is to silence critics and opposing viewpoints, hoping that the tedium and weariness will simply shut up dissent.

Sometimes, it works, and it worked for a very long time (until Donald Trump hit the scene).  Indeed, immediately after the 2016 presidential election, the tension of full-blown Trump Derangement Syndrome made it impossible to even engage in good-natured ribbing with Clinton supporters.  After eight years of spiking the football in cultural victory after cultural victory, the Left couldn’t take the shock of defeat in stride.

Post-Trump, however, some things have improved.  As Charles Norman wrote in an essay at Taki’s Magazine (“Trapped in the Closet,” 15 June 2018), “Courage is contagious.”  Once candidate Trump exposed the cracks in the Cult. Marx. framework, free speech began to get off life support.

“…it’s good news that Donald Trump is doing so well in the American political primaries. He is vulgar, abusive, nasty, rude, boorish and outrageous. He is also saying what he thinks and, more important, teaching Americans how to think for themselves again.”

Trump was not the first to lead the way.  Polemicist Ann Coulter, philosopher Richard Weaver, commentator Ben Shapiro, Supreme Court nominee Robert Bork, National Review founder William F. Buckley, Jr., President Ronald Reagan—the list goes on and on.  Each laid a stone in the forgotten byway of liberty that brought us to where we are today.  Our Founding Father’s cut the path, especially with the First Amendment and its free-speech safeguards, which are virtually unique in the world.

To close, I’ll share a brief personal anecdote:  I remember being at some soiree not long ago, and was talking with a parent of some former students.  Somehow, the discussion turned to politics.  There’s always a brief moment in such situations that feels like you’re about to jump off a diving board, and you’re either going to land in water, or a lava-filled shark tank (don’t ask me how the sharks survive; that they do makes them all the more sinister).

I reluctantly-but-hopefully discussed the positive legacy of President Trump; I landed in a pool of soft marshmallow fluff.  He, too, was quietly enthusiastic, and we spent the next half-hour relishing having found a fellow traveler.  That’s what being a pro-Trump conservative—even in the rural South!—is like sometimes.  When you meet another one, it’s like encountering another human being on what you thought was a deserted island.

In short, everybody lighten up!

16 thoughts on “A Discourse on Disclaimers”